“While bush encroachment constitutes an immense challenge for Namibia, it also opens significant commercial, as well as unprecedented socio-economic and ecological opportunities,” said Professor Hannes van der Walt, Dean Faculty of Engineering. “At NUST we are proud to be taking the lead in shaping these amazing new opportunities for Namibia.”

“Supporting our science institutions is one of the keys to build a strong bush biomass sector in Namibia which is based on knowledge,” Timoteus Mufeti, Environmental Commissioner of the Ministry of Environment, Forestry and Tourism (MEFT) commented. “As the bush biomass sector grows, we have to ensure that equally scientific research capacities are built that can support that growth. 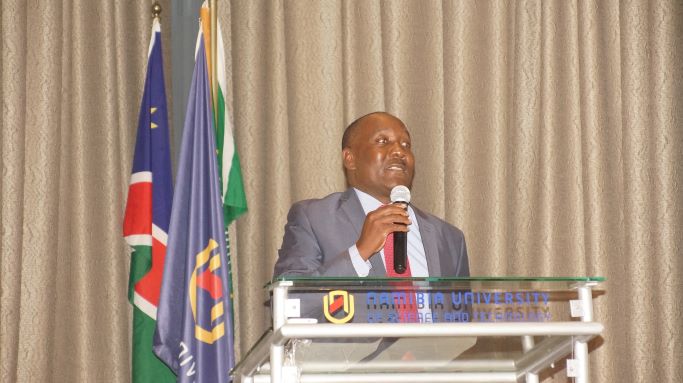 The NUST BUSH project showed that the development of innovative technology in the field of bush biomass utilisation can come from within Namibia for a wide range of value chains that can be taken up now by the private sector to make an economically feasible case.

Financed by the GIZ project on Bush Control and Biomass Utilisation (BCBU) to the tune of N$ 5.3 million, the project identified areas which may be of immense benefit to the private sector and farmers.

“While it is too early to announce any details, we are very much looking forward to further cooperation in this important sector.”

Bush thinning can translate to a huge potential for job creation, if the harvesting of biomass is done with small, effective, manual bush thinning tools – rather than with large expensive machines. Consequently, the sub-project ‘Optimisation of Manual Bush Control Methods and Technologies’ has developed a prototype for a trolley mounted hydraulic cutter. 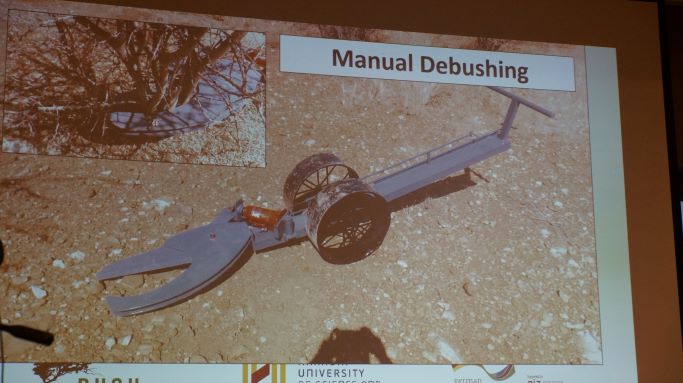 A hydraulic cutter prototype designed by NUST engineers to aid in manual de-bushing.

Evert Strydom, Principal Investigator of the BUSH project strongly suggested that further research on this cutter is done so that Namibia will have its own locally produced machinery, developed for its specific conditions, by the country’s own
engineers.

“We want it to be easy to manufacture and accessible to everyone,” he added. The sub-project on ‘Biochar Production, Processing and Testing’, led by Dr. Ibo Zimmermann, Associate Professor in the Faculty of Natural Resources & Spatial Sciences, looked at how biochar can create income for farmers and entrepreneurs as well as benefits for crop and rangelands. The project developed prototypes for stoves that heat water or allow cooking while producing biochar.

Ultimately, this can make biochar production accessible to many Namibians. Biochar can also be instrumental in rangeland restoration and horticulture production: adding biochar to soils can create housing for beneficial microbes, return minerals and increase water holding capacity. 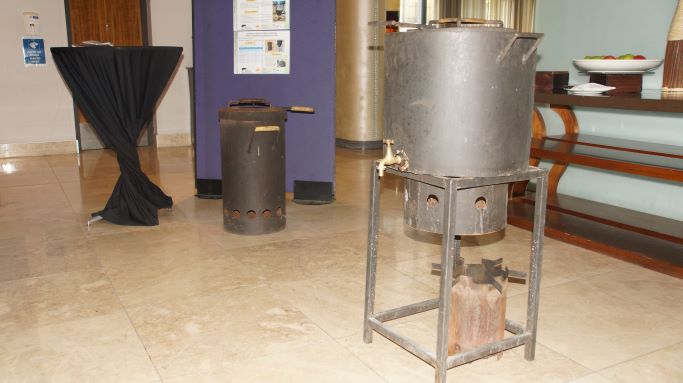 A stove that serves as a bio-char producer, and water heater.

However, the research showed that these benefits will only be realised in the long-term. A ‘Techno-Economic Assessment of Bio-Gasification Technologies’ based on encroacher bush was conducted.

This technology is highly relevant for electrification of off-grid communities and businesses such as hospitality operations. With gasification, Namibia can develop a powerful renewable energy source.

Based on the assessment of the ‘Production Technology for Animal Feedstock from Bush’, project findings can help farmers in their decision of purchasing the appropriate machinery for the production of bush feed. Research finding showed, not surprisingly, that Namibian conditions are very challenging and that many imported machines struggle. It is important for farmers to realise that costs of running imported machines will be considerably higher than what is noted in the manufacturer’s or supplier’s specifications.

One sub-project looked into the opportunity of Wood Plastic Composite Production Technologies. These are mixtures of thermoplastic polymers and wood flour. They can be manufactured in different colours, shapes and sizes and can be used for a wide variety of applications, including windows, door frames, fences, landscaping timbers and furniture. Here lies another promising investment for entrepreneurs in the country.

“In most cases, value addition of biomass requires specific analyses. Few analytical services were available for the biomass industry within Namibia. The industry had to rely on laboratories outside the country which is costly and time-consuming. Today, this has changed. Supported through funding by GIZ, NUST is in the process of establishing an analytical service centre for the biomass industry. This will allow the support of a wide range of industries and applications and help Namibia to become more independent in testing woody biomass samples in future”, noted Professor Habauka Kwaambwa, Head of Department for Natural and Applied Sciences in the Faculty of Health and Applied Sciences at NUST.

Bush encroachment is one of the key agricultural challenges in Namibia and is causing massive economic and ecological damage. To date, it is estimated that more than half of the country’s prime rangelands are affected by this phenomenon that is characterised by the excessive expansion of bush, at the expense of other plant species, especially grasses. It affects 30 to 45 million hectares, which is more than 30 per cent of Namibia’s total land. 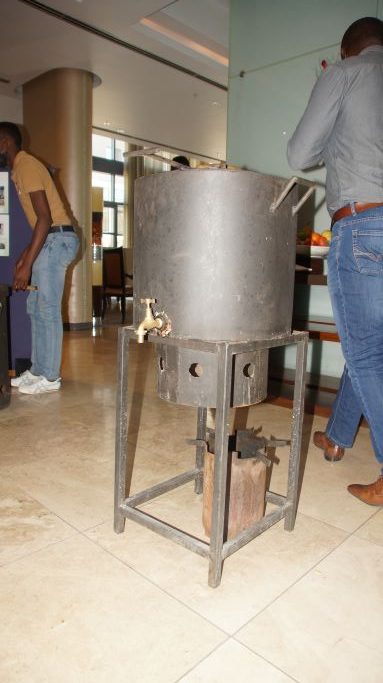 A stove that serves as a bio-char producer, and water heater.

The most significant consequences of bush encroachment are reduced carrying capacity of affected rangelands, groundwater recharge and biodiversity loss, increased atmospheric carbon dioxide levels and desertification. Over the past two decades, the Namibian government has been implementing activities tailored to combat bush encroachment.

These activities are articulated in the Harambee Prosperity Plan (HPP), the 5th National Development Plan (NDP-5), and the National Rangeland. – musa@namibiadailynews.info

Work for your people, not social media: Shifeta

GLOBALink | Connecting Africa to the world