Hangana Seafood, a subsidiary of the Ohlthaver & List Group (O&L) and the Namibia Fishing Industry (NFI) and Fisherman Workers Union (FWU) have signed a one (1) year substantive agreement. The agreement saw 1514 bargaining unit employees of Hangana Seafood receive a 6.5% increase on their basic salary, effective 1 July 2022.

Francois Olivier, Managing Director of Hangana Seafood in his statement commended the NFI and FWU for the way in which the negotiation process was handled and concluded to reach a common goal for the employees and the company. Said Francois: “The business recognizes that Namibians have not been safeguarded from the global economic pressures arising from increased inflation and the cost of living as a consequence of the war in Eastern Europe that is impeding our recovery post-Covid.” He further added that “This is in line with our Group Purpose of “Creating a Future, Enhancing Life” as we as Hangana Seafood are committed to contributing towards the bettering of the livelihoods of our employees and their families. Our employees are integral in achieving success, not only as a business but also as a contributor to the overall success of the industry and the sustainability of our country.” Olivier also stated that the work of the Hangana team is not done yet and that now is the time for them to rise together to achieve their Vision 2025 goals to be a sustainable business that will continue to protect the livelihoods of all employees and their families. He further noted that the values and breakthrough strategies are the company’s foundation and guideline and that nothing is impossible. 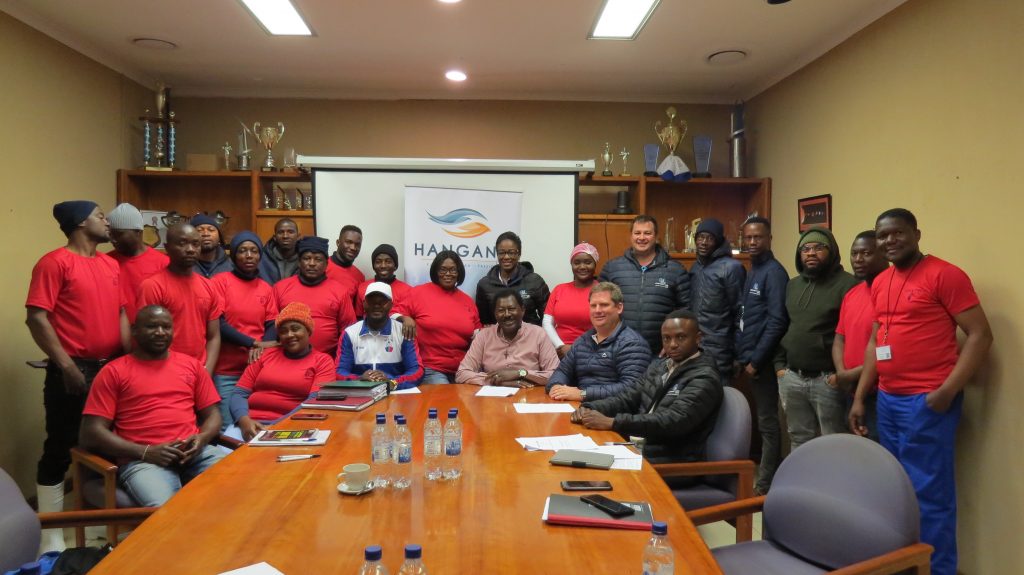 Management and employees of Hangana Seafood and the NFI & FWU sharing in the occasion.

In his statement, the President of the NFI & FWU, Daniel Imbili acknowledged the Hangana team, the negotiating team of both parties as well as the employees of Hangana Seafood for the manner in which they conducted the negotiations, especially during such difficult times. He further stated said that he hopes that other companies, as well as their employees, will follow suit, by paying attention to how the world economy impacts the country and local economy. Said Imbili: “There is no hidden agenda whatsoever in what NFI and Hangana have achieved here. I want to send a strong and encouraging word to our Minister of Fisheries that there are those who want to contribute, build a nation and wish to eliminate the unemployment of our Namibian nation and for them (the Ministry) to look after those who are serious in this regard. To the entire workforce of Namibia, do not be misled by those that come with hidden agendas, but stare reality in the eye to build this beautiful country of ours and not destroy it. We, the people, want the resources of this country that was given by God to be shared equally. However, we need support, commitment, and cooperation to work as a team. We need to become the number 1 country that understands the employer and employee relationship so that our economy can recover after the pandemic and that should something similar happen again, we will be ready to face it.”

Unemployment is leading to hunger at Oshakati

Namibia’s economy expected to grow by around 3...