WINDHOEK, Mar. 17 – President Hage Geingob has paid tribute to the late former president of Zambia, Rupiah Bwezani Banda, lauding him a distinguished diplomat and Pan-Africanist beyond reproach. Geingob highlighted that president Banda was a statement who dedicated his entire life to the pursuit of freedom, justice and prosperity for the peoples of Zambia, Southern Africa and Africa at large.
Reminiscing of president Banda’s pioneering efforts, Geingob said: “I still recall how in 1974, the late Banda took on the
responsibility of President of the United Nations Council for Namibia, whilst serving in as the Permanent Representative of Zambia to the United Nations.” 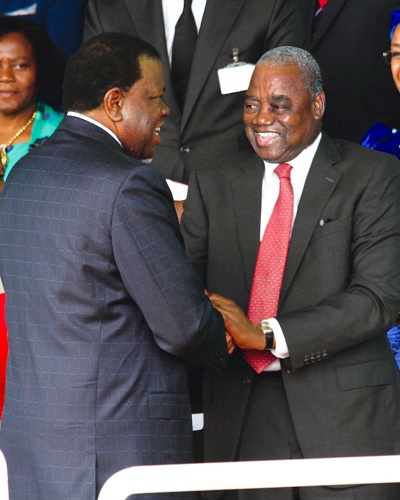 “During his tenure, Ambassador Banda became a pivotal voice on the international stage in advancing our cause for  independence and sovereignty,” he said.

Geingob described the passing on of Banda as a monumental loss to the people of Namibia as a staunch advocate for democracy as well as having been a ‘true dependable friend.’

“We find refuge from our grief in the wake of his passing, in remembering his robust and steadfast contributions to the struggle for liberation in our region and the strides he made for the socio-economic development of the people of this region. It is against this background that I wish to thank the family and the Government of Zambia for organizing
this most befitting and solemn send off in honour of this departed distinguished son of your great country.”

Geingob was speaking during the occasion of the state funeral service for the late Banda. – musa@namibiadailynews.info

Writing is something that has the capability to soothe the soul. It has the capability to churn out knowledge changes lives. Yet, in the wrong hands it has the capacity to destroy reputations and lives. Ultimately, writing is a tool that inevitably shapes humanity and its future. The ability to put forth ideas in a meaningful, dynamic and glorious manner for a greater purpose. That is when one has submerged themselves beyond the threshold.

At least 10 killed in road accident in...